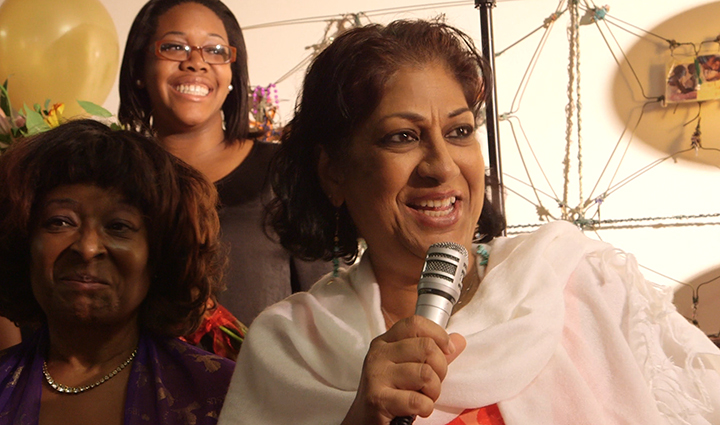 Dazon Dixon Diallo
Atlanta, GA
Dazon Dixon Diallo is the founder and president of SisterLove, a non-profit organization in Atlanta, GA that serves and supports women living with HIV and their families. A Southerner who possesses a Masters in Public Health, she has a powerful understanding of how race, class, gender and sexuality intersect with history, politics, and health. She points out that it could have easily been foreseen that HIV and AIDS would come to plague communities of color within the United States, given the economic conditions and social pressures under which those communities struggle. And communities of color in the South, where Dazon lives and works, have been hit harder than anyone else in America by HIV/AIDS.

Dazon argues that HIV/AIDS treatment, prevention, policy, and education must take into account the health and needs and roles and realities of all women. And that it will take the empowerment and leadership of women to ensure that happens. “It will be women who close the door on this epidemic,” Dazon says. “I am not confused about that, at all.”

Laurie Dill, MD
Montgomery, AL
Dr. Laurie Dill is the Medical Director/Chief Medical Officer of Medical AIDS Outreach of Alabama (MAO).  A native of Alabama, her undergraduate degree is from Vanderbilt University, and she attended medical school and residency at the University of Alabama at Birmingham Medical School. She is Board Certified in Internal Medicine and is certified as an HIV Specialist by the American Academy of HIV Medicine. She has been treating HIV patients with MAO since 1996, and has been the Medical Director since 2006.  She is on the Governor of Alabama’s Commission on HIV for Children, Youth and Adults. She has co-authored two studies on Domestic Violence in Primary Care settings.

Terry McGovern
New York, NY
Terry McGovern founded the HIV Law Project in 1989 where she served as its executive director until 1999. Ms. She successfully litigated numerous cases against federal, state and local governments including the groundbreaking S.P. v. Sullivan, which forced the Social Security Administration to expand HIV-related disability criteria so that women and low income individuals could qualify for Medicaid and social security, and T.N. v. FDA, which eliminated a 1977 FDA guideline restricting the participation of women in clinical trials.As a member of the National Task Force on the Development of HIV/AIDS Drugs, she authored the 2001 federal regulation authorizing the FDA to halt any clinical trial for a life threatening disease that excludes women. In 2001, she was named director of the Women’s Health and Human Rights Advocacy Project, at Columbia’s Mailman School, whose goal is to improve the reproductive and overall healthcare of low- income women. Terry has published extensively and testified numerous times before Congress and other policymaking entities.